For more than 18 years the Port Adelaide community has, in one form or another, been involved in genuine consultation with the government to work out the best possible outcomes for the re-development of the Inner Harbour. This has included LMC community consultations where a large group of representatives from the community met once a month with government reps to discuss the redevelopment and its progress, later, a Cabinet appointed Steering Committee for the Port's redevelopment was established where a selected group of community representatives, from all walks of life and representing a broad spectrum of the community, were consulted on our expectations and our vision.  The results of the consultations initiated public displays and open days, the first in 2012 where 4,500+ members of the community attended and responded to concept plans for the redevelopment of the Port and the second in 2016 where more than 300+ members of the public turned up to again validate the direction the development was taking. The outcomes of the first public open day included 1500+ written comments and the production of the Port Adelaide Precinct Plan. An outcome of the most recent community engagement which allowed our community to assess Cedar Wood's development proposal, the Port Adelaide Renewal Project - Waterfront Redevelopment Community Engagement Report, was that 158 people left comments at an open day about this area of the redevelopment (115 with pinned notes on the day and 43 came in via a website). It's of interest that the equal highest concerns regarding Cedar Wood's redevelopment proposal were Design and Heritage, sharing exactly 50% of the community's concerns about the proposal.

"25% of comments indicated concern about design elements of the proposal including that buildings of up to 5 storeys were too high; that the design should respond more effectively to the heritage values of its setting; and that the proposal was too 'bold and contemporary'.

In all the time that the community has been engaged, the community has maintained that Shed 26, one of the last two wharf sheds left in the Inner Harbour (Shed 1 has now been approved for demolition so that will leave Shed 26 as the last surviving shed) should be retained in one form or another. The shed has so much potential, at one end of the spectrum it could be creatively adaptively re-used, at the other end, the steel frame of the shed could be retained to be incorporated into a development where innovative contemporary architecture could be inserted into the framework, so that a visible reminder of the Port's history can be acknowledged simply through it's sculptural form while allowing edgy, contemporary design to come to the fore. Adelaide's multi award winning Tonsley Park is an obvious local example of this. 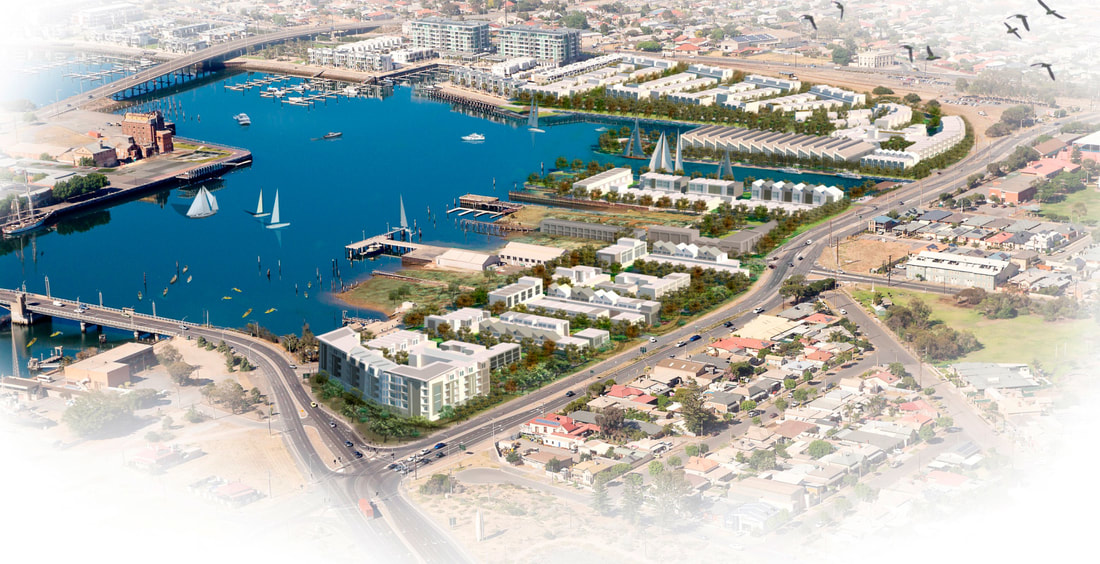 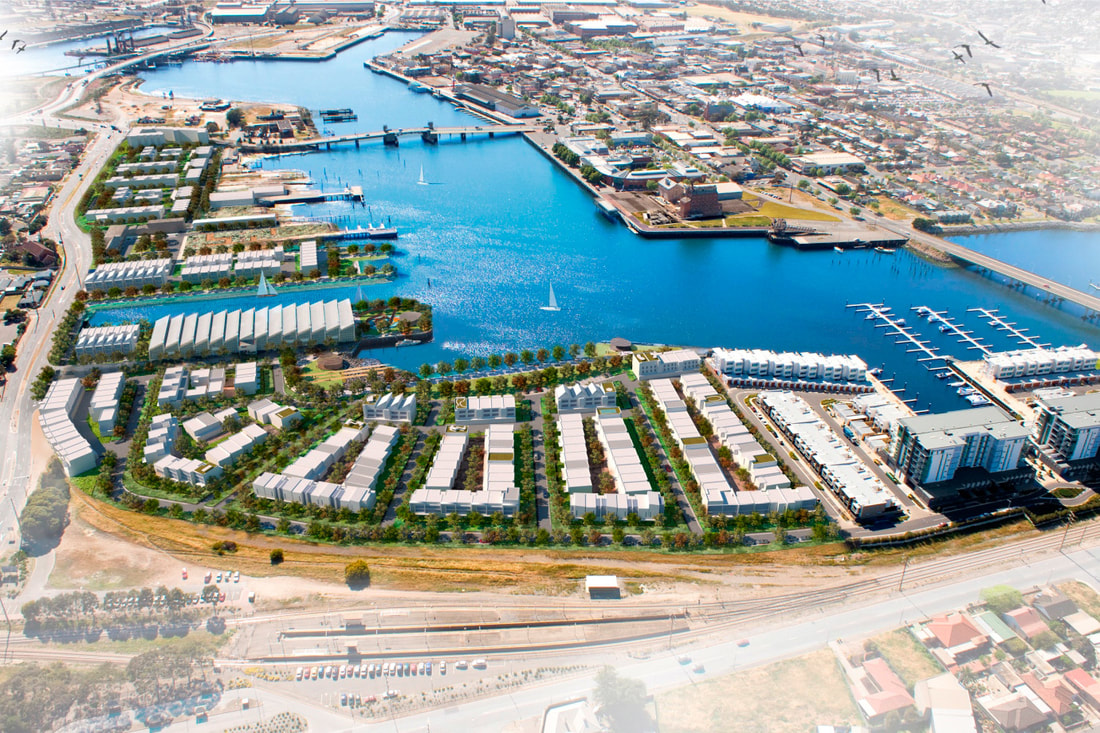 Artist's impressions of Cedar Woods's proposed development of North West and Fletcher's Slip in Port Adelaide. Source: Our PortNewsPort Adelaide to be transformed with more than $280m of private developments, July 2016.
​
Up until a week ago, our community had understood that the developers were producing concepts that respected and were well on the way to meeting the community's expectations. Concept renderings had been published in July 2016 (above).  With so many examples in Australia of how Adaptive Reuse has invigorated waterfront communities, it felt like a given that this would be the outcome that everyone was aiming for. But no. On Friday the 23rd of November 2018, the chosen developer, Cedar Woods, came out in the media to say that Shed 26 was to be demolished, doing anything else was just all too hard. So it appears now that, when the primary school across the road closes for summer recess in mid December, the developers intend to remove the Shed from the fabric of the Port.

This is what doesn't constitute consultation

Since the July 2016 display at Hart's Mill which showed the shed as being still part of the overall site plan, the community had no consultations with Cedar Woods.  In January 2019 after CW came out and said they would revisit the idea of Adaptive Re-Use, the Shed 26 Alliance managed to organise a meeting with Cedar Woods, a representative from RenewalSA to discuss potential Adaptive Re-Use of the building. Following the meeting we had concerns that Cedar Woods would regard the meeting as fulfilling their community consultation obligations, so a letter was sent to the Cedar Woods representatives after the meeting outlining our concerns with the meeting and how it DIDN'T represent, in any way, their view that it was community consultation.

Just a reminder that one of the principal project objectives from the 2015 “Request for Proposal” for the Port Adelaide Waterfront North West Precinct, that Cedar Woods responded to with their illustrated concept plans as shown above, was to; “Engage the community in the delivery and leverage the strong community support for the revitalization of the area.” 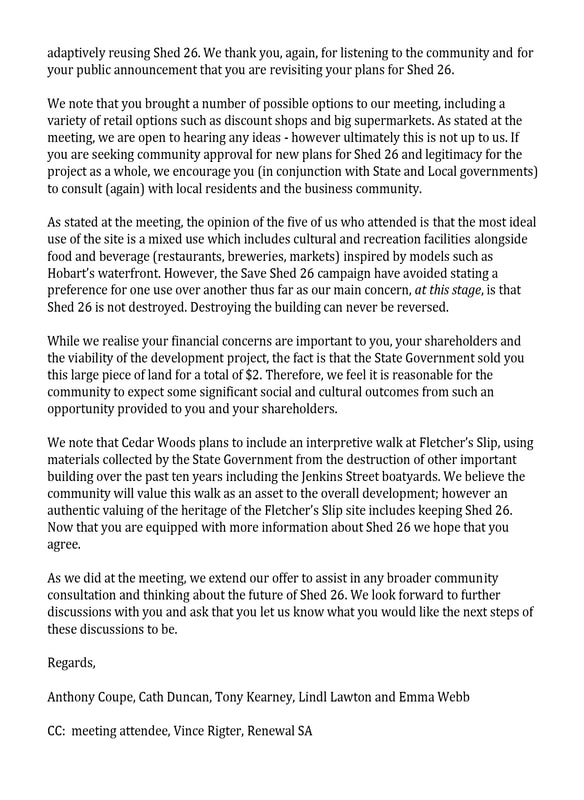 SOME QUOTES FROM CEDAR WOODS AND RENEWAL SA

"Cedar Woods is very pleased to be selected as preferred proponent to develop Port Adelaide’s North West and Fletcher’s Slip precincts. These precincts have the hallmarks of a truly great Cedar Woods’ development including over 1 km of Port River frontage with a public promenade and heritage buildings to be retained."
Patrick Archer, Development Director of Cedar Woods, News, Our Port, July 25, 2016

"PLANNED DELIVERY OUTCOMES FROM THE PORT ADELAIDE PRECINCT PLAN INCLUDE:
Respect our heritage by celebrating and restoring historic buildings, ensure a strong connection between the old and the new, retain heritage wharf areas and activate the water for recreation."
Port Adelaide Precinct Plan - Our Port, January 2014

Key themes that have emerged from the various studies and investigations of the Port Adelaide Centre and waterfront precincts over the past decade include:
•   the need to ensure that community values and objectives are at the heart of regeneration and that a shared vision for the waterfront has a sense of community ownership;
•   renewal should capitalise on the maritime heritage and the uniqueness and character of the Port should be preserved and enhanced;
Page 4, Port Adelaide Precinct Plan, 2014

My father was a welder in the ship yard 1966-72. I attended many ship launches through that time. What annoys me is the lack of historical appreciation for this building, as it stands as a reminder for all the ship builders and their families who helped shape the direction of Port Adelaide's future with their skills and to some their lives.