17 April 2019
Minister Davis Speirs MP has, today, used his ministerial right to over-rule the SA Heritage Council's decision to list Shed 26 in the state's heritage register.   He cites "public interest' for his decision in the following media release:

The Minister for Environment and Water has directed the South Australian Heritage Council to remove Shed 26 at Port Adelaide from provisional listing in the South Australian Heritage Register.
Under section 18(7) of the Heritage Places Act 1993, the Minister has the ability to direct the Council to remove a provisional listing if it is deemed to be contrary to public interest.
Minister for Environment and Water David Speirs wrote to the Council today to inform them of the decision.
“I appreciate and recognise the important role that the State Heritage Council has in identifying, promoting and protecting heritage places,” said Minister Speirs.
“I also wish to acknowledge the work the Council undertook in its consideration of this complex and challenging matter and for the advice it provided to me as part of my decision-making process.
“The complexity of this matter has been compounded by conflicting opinions received from the Council and Heritage SA, two of the advisory bodies which I rely on for their advice regarding heritage matters.
“I have met with a broad and diverse range of stakeholders, some who support Shed 26’s listing, and some who do not. I have also visited the site a number of times.
“Overall, I am of the opinion that on the balance of the arguments and evidence, the confirmation of heritage listing for Shed 26 would be contrary to the public interest.
“If the listing were to be confirmed, there is a risk that the proposed development would not proceed or at least would be delayed for some time.
“This would jeopardise the social and economic benefit to the state and the renewal and revitalisation of the Port with the potential stalling of a $160 million development and 180 direct jobs being created.
“The defence industry submarine and shipbuilding project that is due to commence in the area will create substantial social and economic stimulus in Port Adelaide and surrounds.
“There is an argument that Port Adelaide will need additional residential accommodation to house employees of the shipbuilding project.
“Furthermore, should the project stall, there is a likelihood that the site would continue to languish in its current state, especially without significant funding which would likely have to be provided by government.
“Should the state government choose to attempt to activate Shed 26 for a public purpose such as a new maritime museum, there would need to be a large investment, in the millions, that would need to be shared by all taxpayers to bring this structure to life.
“This to me cannot be justified. While I am extremely sympathetic to the adaptive re-use of heritage and the importance of Shed 26 to the local community, I do not believe this would be the most appropriate use of public funds.
“Whilst, I cannot predict the success of the Cedar Woods development at Fletcher’s Slip, they are seeking to invest significant capital into South Australia, particularly Port Adelaide, and I believe this is for the benefit of the public.”

We are saddened and incredibly disappointed by the Minister's decision.
26 March 2019: Update #2
Just 2 hours after the unanimous and overwhelming decision today, to recommend Shed 26 for State Heritage Listing, Environment Minister David Speirs MP has announced he is considering using his Ministerial power to intervene and over-rule the SA Heritage Council decision.
The Minister has written to SAHC chairperson Keith Conlon asking him to defer any decision on permanent listing while he considered whether to use his power to scrap its current listing altogether. To overthrow this decision makes a mockery of heritage process in South Australia. Shed 26 met 4/7 criteria - it only needed to meet 1 to be listed.
The decision today does not jeopardise Cedar Wood’s Fletcher’s Slip development project. The shed is ripe for exciting and innovative adaptation within the 5+hectare overall development site.  It’s important for the community to know that the South Australian Government sold/ transferred this site to Cedar Woods for the grand total of $2.00 in November 2018.
It’s completely reasonable for the community to expect the heritage and character of the Port to be included, respected and embraced in a multimillion dollar profit making project.
Please write to Minister David Speirs, the Premier of South Australia and other Cabinet Ministers as a matter of urgency.

26 March 2019: Update #1
The SA Heritage Council voted today to support the permanent state heritage listing of Shed 26, finding that it meets four criteria for state heritage (a, d, f and g).
The recommendation now requires a Summary of Heritage Place report to be prepared and adopted at their next meeting on 11th April 2019. This report has not been prepared yet as the decision went against the government’s assessment report delivered at this morning’s meeting.
State Government was called upon to respect the decision of the SAHC and not intervene in the formal process while Shed 26 remains provisionally listed until its meeting in April.

Thank you to the SA Heritage Council and congratulations to everyone involved in saving this important South Australian icon!
A bit of background
When the Port of Adelaide Branch of the National Trust heard whispers a few months ago that Cedar Woods, the developers, were contemplating the demolition of Shed 26, PoANT quickly put together an application for the State Heritage Listing of the shed. Up until that time the developer had presented material at public consultations that showed the shed being included in the development. The motive for PoANT to attempt to heritage list Shed 26 was firstly to protect the building from demolition and secondly to buy some time so that they and the wider community could meet with the government and the developer to find a way, which benefited everyone, to include the shed in the re-development, in one way or another, as originally planned. On Thursday the 6th of December, a six person panel of independent heritage experts met to determine if the shed would be heritage listed. After reviewing the application and listening to strong arguments put to the panel by a member of the National Trust regarding the shed's significance, the Heritage Council voted unanimously (six votes to zero) to give Shed 26 a Provisional Listing for three months.

What does that mean?
Provisional Listing means that the shed is protected for 12 months or until the Heritage Council makes a decision. Another scenario that will impact the interim listing is if the Minister for Heritage exercises his delegation, for or against the determination of the Heritage Council, if he considers that is in best interests of the government. Yes, he can take the Shed off the Provisional Heritage Listing register. But let's just say for now that the Provisional Listing runs it's 12 month course. This will mean that over the next three months the developer, government and others can put forward submissions that argue for the shed's demolition, while anyone who wants the shed not to be demolished can put forward submissions for the saving of the Shed. Anyone. Once the Provisional Listing has been "advertised" then from that point on there is a three month period for groups or individuals to write and submit a submission to the Heritage Council. We will be putting up information about how this can be done including any links once the Listing has been formally advertised.
This has been posted on Facebook by Heritage South Australia (11.12.18)

THIS IS YOUR CHANCE to provide the Heritage Council with a submission about why Shed 26 meets the criteria for listing as a State Heritage Place.

YOU MUST USE THE SUBMISSION FORM that will be available from Heritage South Australia's website from tomorrow.

Link here:
https://www.environment.sa.gov.au/…/s…/entries-confirmations
​
IF YOU WANT THE HERITAGE COUNCIL TO CONSIDER YOUR SUBMISSION YOU MUST ADDRESS THE CRITERIA AND USE THE SUBMISSION FORM.

The information you provide should address why Shed 26 is important at the State level.
​
The period for making a submission closes 5:30pm 12 March 2019. Submissions received after that time cannot be considered by the Heritage Council." 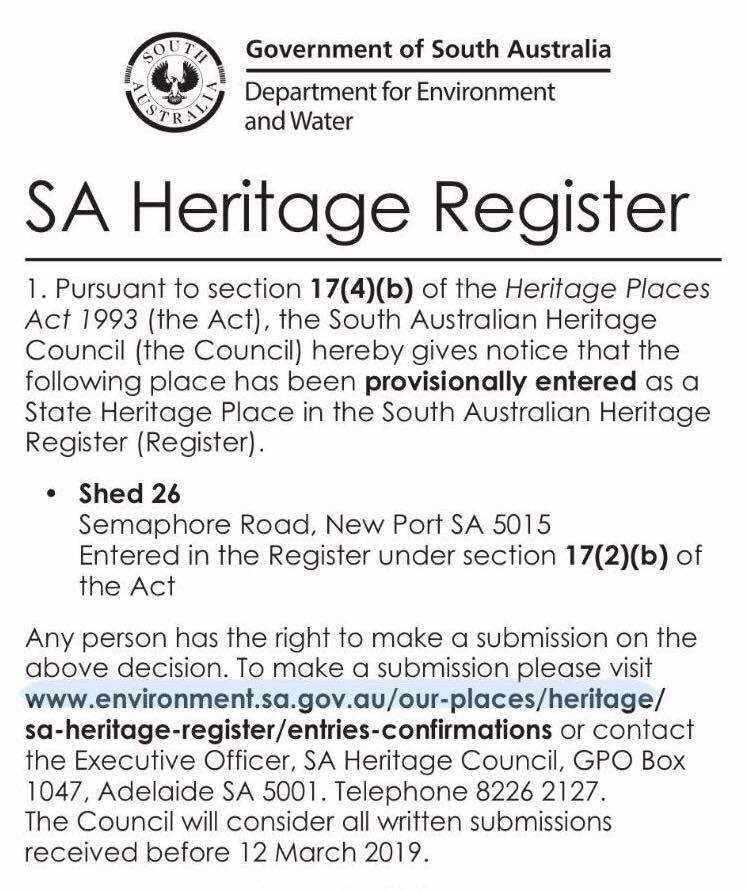